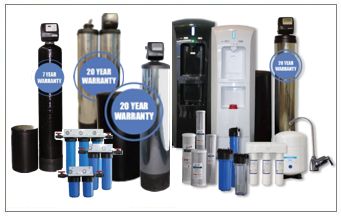 Most water softeners on the market operate on an “ion exchange” system. This is where hardness ions (calcium and magnesium) are exchanged for sodium (salt) or potassium (salt) ions. This takes place within the resin tank of the water softener. When water flows through the tank it comes in contact with small resin beads that are covered with sodium or potassium ions. As the water flows through the resin beads, the calcium and magnesium ions trade places with the sodium ions. That is why softened water becomes higher in salt content.

Eventually as larger volumes of water is softened the beads become exhausted and contain nothing but calcium and magnesium, thus requiring recharge. That is why you need to put bags of salt in the brine tank. The brine tank is either beside the resin tank or is packaged together with the resin tank as a single unit. Recharging the mineral tank works exactly the same way as softening the water except in reverse. The calcium and magnesium again swap with sodium or potassium rich solution from the brine tank, and the excess minerals are rinsed into the wastewater drain.

A “demand initiated regeneration” or DIR water softener is the most common ion exchange softener being sold locally. This system meters the water usage over time and only regenerates when needed. Some softeners operate on a timer or schedule that regenerates at set increments. This older technology can be very wasteful in terms of salt and water usage as the softener will regenerate even if it is not required due to low consumption in the home over a given time period. At the same time, these models could leave you short of soft water if you have higher consumption due to house guests, etc.

You can combat hard water in various ways, including filtering it by distillation or reverse osmosis, adding a packaged chemical softener such as powdered borax or washing soda (sodium carbonate), or running it through a water softener.

Filtration in sink taps and refrigerator water dispensers improves water's taste, but its steep price tag makes it impractical as a household solution. Packaged chemicals soften water in small batches, such as washing machine loads, but render the water undrinkable, take a toll on clothes, and, in some cases, contain phosphates that harm the environment.

Descaling offers an alternative to water softening. Whereas a water softener removes the problem (minerals in the water), a descaler addresses the damage caused by the problem (scale buildup). You will sometimes see ads for "salt-free water softeners," which are actually descalers, or for magnetic water softeners, which remain unproven and don't change the chemical composition of water, so buyer beware

With all this in mind, it's clear why water softeners are so popular: They remain the least costly and most effective way to rid your water of troublesome minerals.