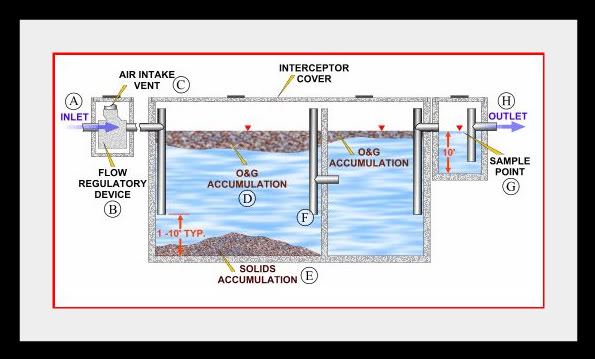 When you need a Grease Trap installed call us. we install and repair grease traps.

What is a Grease Trap?

A grease trap or grease interceptor is a receptacle located between the restaurant drain lines and the sanitary sewer lines that allows for the separation and collection of fats, oils and greases (FOG) from the used water, preventing such materials from entering the municipal sewer system.

The grease trap can either be located inside of the establishment or on the outside. Typically large restaurants or school kitchens will have their grease trap/ grease interceptor located outside of the facility, usually in the ground, while facilities with smaller traps can usually house theirs indoors.

Why do I have to have a grease trap?

FOG wreaks all kinds of havoc on municipal wastewater systems, which is why local governments require commercial kitchens to have a grease trap installed. Most municipalities will have a minimum amount of FOG that is acceptable in the water leaving an establishment. IF these minimums are exceeded, fines can be imposed.

How do grease traps work?

Grease traps slow down the flow of water coming from drains, allowing the water/ grease time to cool. This cooling causes the grease to coagulate and float to the top, while other, heavier solids, fall to the bottom of the trap. The remaining water is free to pass through on to the city sewer lines.

How do I maintain my grease trap?

Proper grease trap maintenance is very crucial in order to have an efficiently operating grease trap. Many problems can occur if the levels of collected FOG and solids are not monitored. Problems such as drain line blockages and back-ups, foul odors and even worse, too much FOG being deposited into the city sewer lines, which can lead to big fines.

Depending on the size, there are different ways of cleaning the grease trap. Many state and local governments have ordinances requiring that a grease trap be pumped out every so often, so it is important to first check with local government to find out this particular criteria. However, aside from any mandatory pump-outs that may be required, there are other methods of cleaning a grease trap that should be considered.

Many restaurants/ kitchens that have smaller grease traps often have their maintenance staff handle any grease trap maintenance. This could typically involve manually shoveling and vacuuming out the accumulated FOG and solids and disposing with the solid waste. It is important that if this is the step taken, any liquid waste be absorbed by an absorbent, like kitty litter, to ensure that the waste is picked up.

Most restaurants with larger grease traps will typically employ the services of a professional recycler/ hauler to pump-out and maintain the grease trap when the FOG accumulation gets too high. This is obviously easiest, but can be pretty costly especially if it is a weekly or monthly process.

One grease trap maintenance routine that any restaurant or kitchen can implement to control the FOG build up and reduce the necessity of pump-outs is the use of a bacteria additive. Grease trap bacteria aids in the reduction of FOG and other organic waste by biologically breaking down and digesting the waste leaving behind only carbon dioxide and water. This can significantly reduce the need for frequent pump-outs along with controlling odors emitted by the grease trap. Additionally, as some of the bacteria are washed out with the water, it will serve to benefit the municipal wastewater-receiving stream. Grease trap bacteria is available in varying types. Most common is probably the liquid form, which can be poured down the drains or applied directly to the trap. Another popular style is bacteria blocks, which are slow dissolve blocks that are suspended from a rope and submerged into the grease trap. Depending on the size of the block and grease trap, these blocks will last up to 4 weeks at a time. Powder varieties are also available and generally take up less shelf space and are cheaper to ship. Finally, grease traps can be set up with automatic injection pumps to automatically pump bacteria into the grease trap at set intervals for virtually maintenance free treatment.

In addition to keeping FOG minimized in the trap, bacteria can also serve to benefit drain lines in the kitchens as well. By mixing up a solution of the bacteria and pouring down all drain lines, the plumbing can be kept clear of FOG build-up that results in slow draining sinks and foul odors.

Other things to note to ensure good grease trap maintenance are to be sure and keep records of when maintenance procedures are done, such as pump outs, clean outs, when bacteria was added, etc. Also, staff should be encouraged to not just rinse everything down the drains. When possible, encourage the staff to throw solids and other waste in the trash. Do not hot rinse (hot flush) the drains and grease trap. This means running hot water through the lines to flush out any grease or other build up. This can prevent the grease from cooling in the trap and cause grease to be flushed into the sewer lines resulting in fines from the city. Finally, be weary of enzyme only products. There are many products on the market that are made up of enzymes and surfactants that simply liquefy the grease to get it out of the grease trap. All this does is cause more issues down stream at the wastewater treatment level due to the eventual coagulation and solidification of this grease. It is for this reason that many municipalities are prohibiting the use of such products.

Installing the Grease Trap tank whether above or below the ground is only about 60% of the job completed when is comes to gaining approvals from the local Water Authority and Trade Waste Inspections.

Extras in relation to grease traps can be varied and many.

Our aim is to provide you with a quotation that totally completes and meets all of the Local Water Authority approvals. You may feel that our quote is higher then others that have priced your job but we can assure you that we do not hide information with the purpose of gaining variations later or misleading you